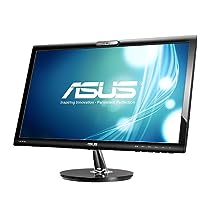 Asus is winning on all fronts
By Daniel C. Pennington
I admit my bias, I have been using Asus back to the 90's for work on high end systems. It was one of a handful of companies that I would even consider using for specialty servers, development, or specialty machines then. It is one of even fewer now. Their failures were always followed by a concerted effort to not only compensate, but out-do themselves next time around.

Their venture into so many different fields at once bothers me a little. They were the kings of good hardware, but like Samsung and so many others, success breeds mediocrity, and I don't want to see them go that way.

But as with their routers, their components, optical drives, laptops brand, and tablets, they have so far done well in remaining true to the innovative roots with the monitors as well...

I am a long-time Samsung die-hard... If you see anything that can display a video in my home, it says Samsung on it, for many good reasons. Asus however caught my eye with the usual pack leading combination of so many possible combinations, good fundamentals and utilization scenarios, that you will never toss them out, because they can be re-purposed forever in valid roles.The pricing they are clearly undercutting others with, to break into these other markets was just icing on the cake.

I bought one of these a couple years ago and used it in concert with my Samsung monitors. I was so impressed with it's handling of my rather extreme switches from 3d Modelling one day, to 2D graphics, web development, DB and low-level C++ stuff, video editing, a full bore Allen & Heath recording studio the next, then randomly throwing on spells of high end gaming or command line only for months at a time.

It fit every role, and never showed signs of inadequacy. When the last Sammy started showing signs of age, I never even had to think, I just bought a matching Asus (and you can mount two 27" side by side nicely with some of the tougher arms Amazon carries, and an extension arm btw...)

So even two years later, this thing was worthy of a similar investment price-wise, despite some of the newer technologies it lacks (3D built in, though my 3GB 580's take care of that nicely anyway)... I am really picky about this stuff... this one was a no-brainer, even being that old...

- Big
- Giant
- Cool
- Asus
- Two on a single rack = amazing (I use the Ergotron single post with two arms stacked and an additional arm extension, I can do just about anything with two 27" monitors without effort... could probably even add another to this...and just might)
- PIP can be set to any other input source (VGA, HDMI etc), I use it on my second monitor to keep remote servers and network monitoring in constant view. There are a thousand uses for this, I love it.
- It has connections for everything, and as Asus has always been masters of, you can use it all together to amazing effect.

- Button array annoys me, I don't like using the menu buttons at all.They are along the bottom and unintuitive. I've bought worse... but think Asus could do better.
- Menu system is fair, but again not as easy or intuitive as it should be, mostly due to the buttons
- Camera a bit weak, inflexible. But I only really use it for security and face recognition anyway.
- it has speakers... I guess this is fine, but I haven't really wanted built in speakers since 1996...so your call, I have never heard them, but I don't even know where they are , so no harm to me.
- Frankly I would have liked to see more utilities and software options from Asus support. Unusual for them to throw as little behind these as they have since launch. Such a good line, so little of the software wizardry that I am used to from Asus. To be fair, these don't need anything, and I don't even use what they do offer.

There are monitors that do more (I suppose), monitors that have more advanced features, monitors that have any number of superior specialties. I have not yet however found myself wanting anything more than I have from this set of 27's... and I want equipment that allows me to do anything. I would buy them for anyone I knew that I wanted to be truly happy with what they got. I would (and have) spend three times as much on one if I thought it would fit the bill better.

Great monitor
By Android God
I bought this monitor to replace my old plasma 20 inch monitor in my office, first off the monitor was so easy to setup right out the box. I'm running Linux in my office and the webcam worked right out the box without having to download any drivers. The picture is really crisp, clear and the colors are very vibrant. I spend a lot of time coding so I wanted a bigger monitor and this was the perfect choice, very lightweight, and pretty good size to also watch movies or play games. The refresh rate is very good and I love the fact you can easily choose between HDMI, DVI or VGA, all depends on what type of graphics card you have in your computer it has an option for all three. The screen is very bright, colors really pop off the screen. I am really happy with this monitor and I'm planning on buying two more for my office.

-The built-it speakers are terrible. -The screen and display are OK
By Northking
WARNING: This product is not Mac compatible, and Asus knows that.

When I could not get the webcam to work, I called Asus tech support for assistance . Asus informed me that the webcam is not designed to work with Mac. I asked why it is not advertised that way (i.e., why is it not described as Windows only), Asus replied (astonishingly) "Why would we do that?" Big disappointment--severely damages Asus' credibility.

Wecam issue aside:
-The built-it speakers are terrible.
-The screen and display are OK.

If you: (1) are price sensitive in your decision, (2) are Windows based, and (3) don't care about anything other than the display itself, this is probably an OK product. Otherwise, bite the bullet, spend a little more, and get a better product. 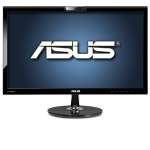