Availability: Usually ships in 24 hours Ships from and sold by Amazon.com
Product Description 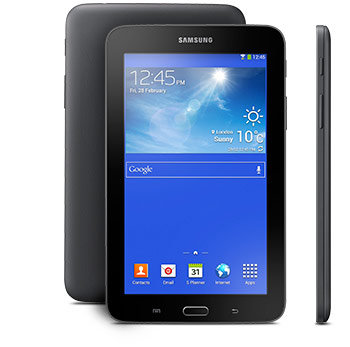 With its slim, lightweight design, the Galaxy Tab 3 Lite is easy to take with you wherever you go. It offers up to nine hours of battery life per charge, so you can browse the web, play games, check email, and enjoy social networking for longer without recharging.

Access More Than One Million Apps at Google Play Store

Watch a movie, go shopping, play games, listen to music, read the latest bestseller, and check in on Facebook or your Pinterest boards. The Galaxy Tab 3 Lite gives you plenty of ways to relax, be entertained, and stay informed.

The Galaxy Tab 3 Lite features a 7-inch display with 1024x600 resolution, making it well suited for watching the latest movies and TV shows, reading e-books, playing games, and more. It's powered by a 1.2 GHz dual-core processor for fast, reliable performance.

A 2-megapixel rear-facing camera allows you to take photos and upload them instantly to your favorite social network. 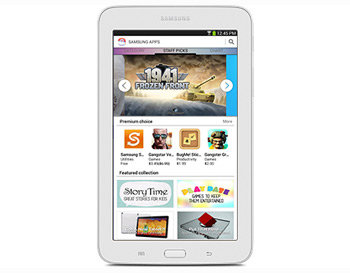 Enjoy instant access to more than one million apps and games. View Larger. 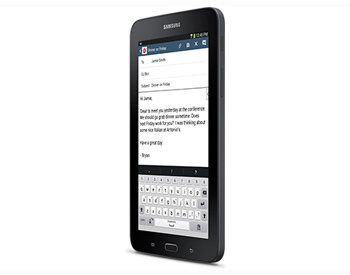 The tablet offers 8 GB of onboard memory and includes a microSD card slot that allows you to add up to 32 GB of additional memory (microSD card sold separately), making it easy to store songs, videos, photos, and other files.

What's in the Box

A great entertainment tablet
By Dustin Farahnak
I've recently purchased a Samsung Galaxy Tab 3 7 inch (the normal, non-Lite version), so it was fun to get to compare that to this Lite version.

The Lite is well built... it feels very solid in your hands, with a a textured back instead of the slick plastic back of the non-lite version. I guess the textured back is less expensive, but it also is easier to hold and feels good in the hand. The buttons for volume and standby feel solid and are easy to press (and to know they've been pressed).

I like the design, too. It's just the right thickness, and the bezel may be a bit wide but this makes it easier to hold. With a touchscreen, it's annoying if I can't hold the thing without accidentally hitting the screen.

The screen itself has a good resolution, but the contrast is definitely not as defined as with the non-lite tablet. This is noticeable when playing darker games or movies.

To test performance I installed a few games and played some HD movies. For movie playback, this sucker is rock solid with no frame skipping I could detect. For games like Airplane!, Radiant, Candy Crush, and Angry Birds, this tablet is great, with pretty visuals and a nice size surface for gameplay. For Grand Theft Auto, San Andreas, with graphics set to maximum, the framerate was too low for easy gameplay. On medium the game was largely playable, though the frames would suffer somewhat if a lot was happening while driving. I found the game great to play on low graphics (which in my opinion look just fine).

I find the performance of the tablet to be fine, but that's worth paying attention to. For comparison, the regular Galaxy Tab 3 performed obviously better on GTA San Andreas on medium, but was pretty similar on max graphics. There was no difference on less demanding games that I could detect. Websites and movies all loaded great on both.

For other differences, it only has a 2 megapixel camera on the back, and no cam on the front. Video chatting is a nice feature of the other tablet, but it's not a big deal to me to lose that feature. In fact, if you have concerns about being spied upon, then you might even like the lack of a front facing cam.

To sum it up, a 7 inch tablet is just the right size for commuters or lounging on the couch. Everything is easy to read, and there's plenty of room for a screen keyboard, but it's also very easy to hold. Surfing the internet or watching a video on this is great, especially when I ride a bus or train around town. While it's watchable in full sun, the picture will wash out, due to the glossy screen and inferior contrast. Battery life is absolutely fantastic! About nine hours of regular goofing off, and about three-four of playing San Andreas (I keep going back to that because it's by far the most stress I can put on the device). You get a Micro SD slot, so you aren't locked in to any content vendor or the space limitations of the device. That alone makes this better, for me, than an iPad or many of the 'best' android tabs. Swiping to type works great, and S Voice is very handy (though Google Now is great for its own purposes). For example, I can set an alarm without fumbling through the menus, simply by double clicking the front button and saying "set an alarm for eight hours (or the time I want)". That is so much better when you're tired and have taken off your glasses.

Android's software library is stout, with a lot of awesome free software, a great browser in chrome, and awesome paid content too. If you haven't had an android device yet, this is an affordable way to get some awesome stuff. If you've only used it on a phone, you will be impressed with how your favorite apps look on a bigger screen. A nice game on a tablet screen puts your old Gameboy days to shame!

I did save a map and use this for navigation for a little while. It did a great job, though I really don't need anything that big for the task.

While there are better deals out there for a budget tablet, I really like Samsung's build quality and proprietary software (S-Voice, for example). Is that worth the extra money (or alternatively the less powerful processor, depending on what you're comparing this to)? I say it is, but with the current price I would go with the non-Lite Galaxy Tab. I suspect that this product will be more affordable in the near future, so this is one to keep an eye on if you're just wanting an inexpensive way to read e-books and watch media. Others may recommend a more generic branded tablet, which for the money will definitely get you more features and horsepower, but I've learned that the poor man pays twice with these mobile electronics. Get the good brands, and you'll be ahead in the long-run.

Good for what it is. Could be better.
By Frankl8593
What is has:

If you're looking for a compact and inexpensive tablet - one you wouldn't worry about getting lost or damaged - this is as good a choice as any. This tablet is a stripped down version of the Galaxy Tab 3. Want to use SKYPE? Sorry, no front facing camera. Want to attach a USB stick, mouse or keyboard? Sorry, no USB OTG support. The tablet is extremely basic, primarily for tasks like reading and sending email, reading a book or magazine, watching Netflix or streaming music. The tablet works ok for what it is and I get about 6-9 hours out of the battery before recharge depending upon how I am using it.
The tablet will work well as a travel tablet, or one for the kids to use. Just don't expect too much of it.

The ASUS MeMo Pad HD7 costs the same as the Samsung tablet but has better screen resolution, faster quad-core processor, front camera, higher-res rear camera and is lighter.
The Lenovo IdeaTab A3000 matches the Lite in all aspects: display size and resolution, Android version, battery but adds a front camera, better rear camera, USB OTG and a more powerful processor at the expense of a little extra thickness and weight.

Again, not a bad tablet for the price, but there are other tablets available with better specs for the same money. If this tablet were priced between $100 and $120, it would be a good deal. At $150+, it's just too expensive for what you get.

The tablet was working fine and charging correctly at night
By DuaneW
After 2 weeks of attempting to get my Samsung Tab 3 warrantied I am told tonight by Willy in Consumer Relations that "there is nothing Samsung can do to repair my tablet", incessantly sighting Physical damage as the cause. The tablet was working fine and charging correctly at night, in the morning it would not turn on or charge. I took two pictures of the charging port showing there was no physical damage prior to shipping it to the repair centre, as I was expecting to be brushed off citing physical damage, as is common with consumer electronics. Willy insisted that there was no way their service centre could have damaged the unit and stated that it was "obviously my fault". I was treated extremely poorly and I still do not have my tablet back, however the service centre will fix it for a fee. When I asked to speak to someone else, I was told "there was no one else to speak with" which I find hard to believe that Willy is solely handling all of the Samsung inbound calls on his own. Buyer beware: Samsung does not honour their warranties and cites physical damage as a reason. 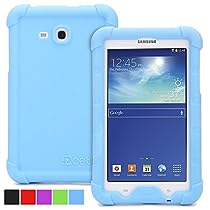