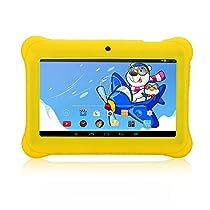 Availability: Usually ships in 24 hours Fulfilled by Amazon and Sold by iRULU
Product Description
What makes iRULU BabyPad Different:
Pre-installed Kids APK provides hundreds of educational apps. Six modules, fit for the child age and ability well, can be switched to assist their study and to rich spare time life. Kids can enjoy the tablet with parental controls in place, which gives free access to know more about your kids.

There is no need to worry about sliding the tablet in accident for each corner of the tablet is around with non-toxic bumpers. Most importantly, it is the biggest surprise for your children to get such a cute tablet as a Christmas gift, well packed with colorful design.

BEWARE of FIRE HAZARD!
By d13k15
Bought this tablet for my daughter's birthday 2 weeks ago. Gave it to her, works great, she loves it ... everything was fine until I went to plug it in before bed to turn on her bedtime music in her room tonight. I couldn't get the cord off the carpet and thought she had glued it, but on further inspection, it had BURNED UP and the tip had melted the carpet fibers! I am terrified to think of what could have happened had the carpet or, something else caught fire.
Clearly the cable is defective, poorly manufactured and clearly not UL Certified. (The cable was plugged into the wall still, but not into the tablet - it was where she had dropped it to the floor this morning I suppose).
So BEWARE! I'm not sure what to do - return the tablet or just use a trusted Anker or Samsung micro-USB cable.

Cons:
Terrible camera (honestly shouldnt have been included its so bad)
Screen has limited optimal view angle
Kind of slow to load at times
Annoying malwareish DU Update Speedbooster pop ups (might be because of Andriod OS and not the tablet, but annoying nonetheless)

About the kid interface app:
It could be greatly improved upon. Somewhat clunky for adding apps to various categories (books, games, drawing, media, misc). When opening an app category it occasional errors with "Failure to load" or something like that and is confusing for child use. It would be nice to have more control over usage, for example, ability to lock out during bed time. Currently, the only usage controls let you set a length of time it can be used and then set a length it locks out use (can be overridden entering passcode).

Overall great value, but definitely room for improvement (mostly in software and camera).

I would consider buying other products by these guys.

Best tablet for kids!
By Amazon Customer
Bought this for my baby girl who is 3years old and couldn't be happier with my purchase, works great and has everything on a tablet that even an adult could use on a daily basis.You can switch from Child mode to an adult side which is pretty much a regular tablet. I love the child side with the world spinning home screen, never seen a tablet with such a fun interactive home screen. If you're looking for an amazing tablet that wont leave you broke or having to buy a new one after your kid threw it because she wanted more time with it :p then you cant go wrong with this perfect tablet!!
My two older kids want one after seeing how fun and awesome this tablet is, can watch movies/tv shows, play any games from google play store, so instead of spending $100 each on a fire tablet for kids i went with this $40 IRULU tablet and couldn't be happier!
Dont buy expensive ones when you can get just as good or even better for $60 cheaper, heck can buy two while at it lol.

tl;dr- Best tablet ever!! buy now and dont opt out for more expensive ones! 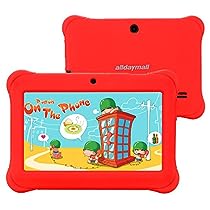 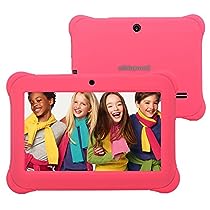