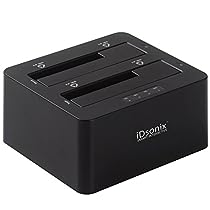 Availability: Usually ships in 24 hours Fulfilled by Amazon and Sold by iDsonix®
Product Description
iDsonixTM IDD-U3201 USB3.0 SATA Hard Drive Dual Bay Docking Station offers swappable access to 2.5" and 3.5" SATA HDD, without having to mount the hard drive or installing it in an enclosure. iDsonixTM IDD-U3201 provides a simple, fast, and cost effective solution for data recovery, drive imaging, and testing centers, or any environment that requires fast access to uninstalled/archived drives.

1. Plug in the power cord to the Dock
2. Connect the Dock to the host computer
3. Insert the 2.5" or 3.5" SATA drive
4. Switch on power
5. The operation system will detect that hard drive has been connected

The IDD-U3201-1 cloning device may not work and there is no way to contact IDsonix
By Bruce C. Smith
This product does not work. I bought this last August but I just now (Jan 2016) tried to use it to back up (clone) the HDD of a new Laptop I purchased in December. The labeling on the device is different than the description in the manual for the Target and Source drives. I attempted to contact IDsonix via e-mail and received no response. I tried calling IDsonix in Nevada but the phone is no longer in service. I am reluctant to use this HDD cloning device because of the discrepancy between the Source and Target drives, I could loose all of my data on the source hard drive if I place them in the wrong slots. Amazon should STOP selling this product. My second issue with this product is the manual does not say whether the device will work with UEFI boot cloning, required for Windows 8 and 10. Amazon should refund the purchase price or provide me a way of contacting IDsonix customer service.

Not a working solution for mounting two HDDs simultaneously
By Steven Shannon
I ordered the iDsonix dual bay dock. It preforms very well when making 1:1 copies of hard disks. It preforms great when there is ONE HDD pluged in to either port. What it does not do well with (not at all) is mounting two hard drives at the same time. I use Linux (OpenSuse 13.2) I can mount one, use it, then unmount it, then go back and mount the second one, but that is not what I bought the device for. i was hoping to setup an external LVM, then when that didn't work, I tried to use RAID0. When that didn't work I formatted them both as ext4. When copying single files from one to the other, both drives spin down (Assuming that you can mount both at the same time, which is not always the case.) and they don't spin up again until the device is reset. If you copy files from your computer to the the drives or vise-vera, it works fine, just so you don't have the second drive active as well. Granted, this may be a Linux issue (I don't think it is) as I don't have a Windows machine available to me to try it out on. After a poking and prodding of the device, I am lead to believe that the device is most likely under-powered to operate both drives at the same time.

If you need a machine to make 1:1 copies, then this might be that machine for you. If you need a dock that allows you to mount two hdds at the same time, then you might want to pass on this one.

Try something else
By Dave
My experience ... yours might vary. I use a Mac, all drives HFS formatted.

Reliability unpredictable, depending on the drive you try to mount. Consistent per drive, but no pattern I've found relating to drive size, as others have reported. I have an old 200G drive it won't deal with at all, but a new 3T that is fine. I assume it has to do with the particulars of the drive interface.
Can't just leave the drive mounted. It will randomly dismount, and remount, on it's own. I have found this with all drives. You need to get your business done, eject, and remove the drive, unless you want the screen to fill up with scoldings from the system about not properly ejecting the drive. 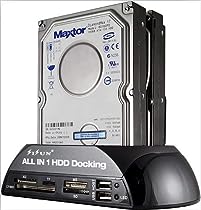 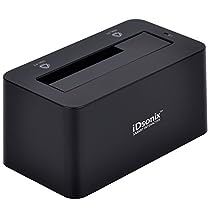