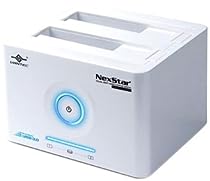 Works Flawlessly
By Stan Carter
This is the second NexStar dock that I have owned and I bought it based on my experience with the single bay Vantec NexStar USB 2.0 eSATA Dock NST-D100SU White dock which I bought back in 2012.
The single bay unit with a 1TB WD Black Caviar hard drive has been connected to my desktop computer via eSATA as a backup drive for four years now and has performed flawlessly over that time.
The new dual bay dock is being used with two 2TB WD Black hard drives, one as main storage and the second as a backup drive. This dock is currently connected to my laptop via USB3. All three hard drives are available from both computers via my wired network.
One difference that I have noticed between the eSATA and USB3 connections is the tendency for the units connected via USB3 to go to sleep when not being used, whereas the unit connected via eSATA on the desktop is always instantly available. This problem probably has more to do with the USB settings on the laptop rather than a problem with the dock itself and is something I will investigate further.
At this stage I haven't tried the new unit via the eSATA connection but I wouldn't expect it to perform any differently to the single bay unit.
Apart from the (minor) problem with the USB3 connection both units have performed flawlessly and I would have no hesitation in recommending either dock.

Pretty good but could be better
By Andrew
I have had this device for about 6 weeks now.

I like that it can handle two drives of mixed size. It can handle 3 TB drives as well. It is reasonably fast as well. I have been able to sustain 180 MByte/s transfers with it when going from devices within the dock and 110 from the dock to my pc. It has worked well on three pcs thus far.

I wish it had a usb port on the front, would have been nice. It seems it wants to be powered off and back on for hotswapping. I guess this is semi-hotswapping. The pc recognizes it ok.The front slot has trouble accepting 2.5" drives, but the back slot fits fine. I think this is because of the ejection lever. I was kinda mad that the white model is so much cheaper. Blue light on the front is very bright.

So far I like this device and do not regret the purchase at all. Amazon was good enough to get it to me on time as well, which was very important.

Like the eSATA connectivity, but USB 3.0 works well also.
By -=rjh=-
Great dock, grabbed one of these when on sale and very happy with it.

I have had the previous USB 2.0/eSATA single bay model for some years, and it has been very useful, so when it came time to upgrade some gear, I looked at the new USB 3.0/eSATA 2 bay dock.

I don't like the white colour (since I'm sure it will yellow with age) but couldn't get black shipped to my region. I hate that everything on Amazon is treated differently depending on where you live, and also, Amazon, please stop suggesting stuff that doesn't ship to my region!

I use it both with USB 3.0 for laptop connectivity, but where it really differentiates itself is using the eSATA connectivity as an external device with my old QNAP NAS, which only has USB 2.0 and eSATA - makes backups much faster!